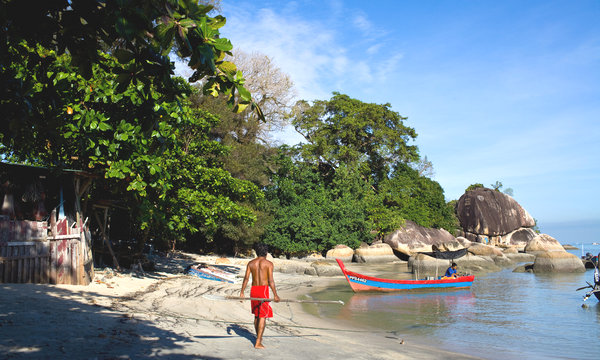 Penang is on a roll. Thanks to an influx of private and public investment and creative energy — precipitated in part by Unesco's 2008 listing of Penang's capital city, George Town, as a World Heritage site — the Malaysian island is padding out its list of attractions. To the region's best street food add smart restaurants and bars. And a lively street culture anchored in religious festivals has now been joined by shows at the recently opened Performing Arts Center, and events like the Penang World Music Festival (March 30 to April 1; penangworldmusic.com), as well as the annual George Town Festival (June 15 to July 15; georgetownfestival.com), a month of exhibitions, performances and readings by local and international artists and writers. Your stay will very likely be more comfortable than it would have been a few years ago, with new boutique hotels opening in recently renovated pre-World War II shop houses and mansions.

Get your bearings with a stellar view atop 2,750-foot Penang Hill. The easiest way up is by funicular. The slightly white-knuckle ride in new Swiss-made air-conditioned coaches takes five minutes or less. Up top, the air is fresh and cool, and the vistas unparalleled: to the south, George Town's neat rows of clay tile roofs; to the north, undulating hills backed by a turquoise sea. If you'd rather walk down (two to three hours) than ride, a little-used jeep trail ends at the Penang Botanical Gardens at the foot of Penang Hill, a 30-minute taxi ride back to George Town.

As the day's heat begins to fade, runners, dog walkers and idlers converge on Padang Kota Lama, a grass pitch sandwiched between Penang's stately town hall and 18th-century Fort Cornwallis. Poke around inside the fort (entrance, 1 Malaysian ringgit, or 33 cents, at 3 ringgit to the dollar), then cross the street to the esplanade overlooking the Strait of Malacca. Buy a bag of kacang rebus (boiled chickpeas seasoned with turmeric, 3 ringgit) from one of the parked white trucks and head to the unpretentious (and nameless) cafe at the esplanade's terminus, where you can watch the sky turn orange over a beer.

Among George Town's recent flurry of openings in refurbished structures, China House (153-155 Beach Street and 183b Victoria Street; 60-4-263-7299) is the most stunning: over 10,000 square feet of food, drink, and retail and arts outlets in three interconnected shop houses in the city's warehouse district. The décor leans to heritage chic, with exposed beams, weathered timber and cement floors, an eclectic mix of Chinois, mid-20th century and contemporary furnishings and splashy textiles. Start with dinner at the intimate BTB+Restaurant (dinner for two, 190 ringgit), where the menu runs to Western dishes with Asian and Middle Eastern influences, then climb the stairs to Galleries I and II to view works by Malaysian and international artists. The best place to wind up the evening is at the stylish Canteen+Bar (drinks for two, 80 ringgit), where arty types mingle with (upscale) backpackers and the after-work crowd around a sheet metal-clad bar; local musicians perform on weekends.

Book ahead for a spot at Nazlina Spice Station (71 Stewart Lane; 60-12-453-8167; pickles-and-spices.com; 135 ringgit for a class), where the bubbly former electrical engineer Nazlina Hussin imparts the secrets of Malay dishes like chicken rendang and ikan masak lemak (fish cooked with spices and coconut milk). Hands-on classes start with a tour of a local market, where you’ll taste pickles made from local nutmeg fruit, and end with a communal meal. Or greet the morning with the old-timers at the dim sum institution Aik Hoe (6 Carnarvon Street; breakfast for two, 30 ringgit) and follow with a walking tour of the city’s architectural highlights led by a member of the Penang Heritage Trust (60-4-264-2631; pht.org.my; 180 ringgit for up to three people; book several days ahead). Finally, have lunch at the International Hotel (92 Transfer Road; 40 ringgit for two), where a Sumatran-run hawker stall in a Chinese-owned coffee shop serves a selection of Malay, Indonesian and Indian- and Chinese-influenced curries, vegetable dishes and sambals.

Housed in a former school built in the late 1800s, the Penang State Museum (Lebuh Light; 60-4-261-3144; www.penangmuseum.gov.my 1 ringgit) presents an engrossing overview of the island’s history, architecture and multi-ethnic population over two floors of exhibitions in Malay and English. Plenty of space is devoted to kitchen culture, local specialties and even the history of Penang’s kopitiam (coffee shops).

The two-block stretch of Armenian Street, named after an immigrant community of businessmen that included the Sarkies brothers of Eastern & Oriental and Raffles hotels fame, is rich with history and consumer diversions. In addition to Sun Yat-sen’s Penang base (120 Armenian Street; 60-4-262-0123), where the architect of the Republican China plotted the downfall of the Qing dynasty, four Hokkien clan associations reside here. With its opulent temple and small but fine museum, Khoo Kongsi (18 Cannon Square; 60-4-261-4609; khookongsi.com.my 10 ringgit) is most definitely worth a look. Gallery hop from Studio at Straits (86 Armenian Street; 60-4-262-7299; straitscollection.com.my), showing mostly Malaysian works, to Galerie Seni Mutiara (118 Armenian Street; 60-4-262-0167; galerisenimutiara.com), exhibiting international artists on the ground floor and, upstairs, a permanent collection of paintings by Malaysia’s early post-independence artists. Handblown glass is sold at Fuan Wong Gallery (88 Armenian Street; 60-4-262-9079). China Joe’s, below Studio at Straits, sells women’s wear and contemporary Asian housewares and furniture, while the “antiques” shop Chin Seng Leong (55 Armenian Street), a dusty hole in the wall, is for serious treasure hunters.

When it moved, almost two years ago, from a glorified lean-to in a nearby alley to a spiffed-up shop house, Tek Sen (18-20 Carnarvon Street; 60-12-493-9424; 100 ringgit for two) tripled its seating capacity. That hasn’t diminished the family-owned restaurant’s charm, or its ability to turn out flawlessly executed dishes that have been drawing locals for over 45 years. The extensive menu includes Teochew and Malaysian dishes, each of them memorable. Highlights: stir-fried roast pork with chiles; whole pomfret steamed with ginger, tomatoes, pickled mustard and sour plums; and gulai tumis, stingray in tamarind-soured spicy gravy.

That Little Wine Bar (54 Jalan Chow Thye; 60-4-226-8182; thatlittlewinebar.com), a snug social spot frequented by expats and Malaysian residents, pours vintages by the glass (20 to 28 ringgit) and by the bottle. A youngish crowd gravitates to Behind Fifty Love Lane (Muntri Street at Love Lane), a cafe and bar in a low-slung cubbyhole; the owners have been known to organize patrons into teams for games of charades.

Pack a towel and hire a taxi (30 ringgit per hour) to Taman Negara Pulau Pinang (Telok Bahang; 60-4-881-3530; wildlife.gov.my/tnpp/biindex.htm no charge), a 3,100-acre smidgen of beach-fringed jungle in the northwestern corner of the island, about 11 miles from George Town. After registering at the park office, hire a longtail boat for the short ride to Monkey Beach (40 ringgit, one way for two people), where you can swim and laze on the sand before tackling the moderately challenging 1.8-mile trail back. The hike, traversing a combination of paved and dirt trails and passing a few secluded coves, takes about 90 minutes.

It would be a mistake to leave Penang without sampling its most iconic dish: asam laksa, a sour, sweet and spicy fish-based rice noodle soup garnished with mint, cucumber and shreds of peppery torch ginger bud. On the way back to George Town, stop at Miami Beach (Jalan Batu Ferringghi) and make for the food court, where a female vendor named Ita serves an exceptional version, thick with bits of sardine (3 ringgit). Eaten accompanied by coconut water (2 ringgit) sipped through a straw, it’s a fitting end to an island interlude.

After an 18-month restoration, the Oasis Hotel, formerly a hostel, has re-emerged as a bijou boutique hotel named after its street address, 23 Love Lane (Georgetown; 60-4-262-1323). Housed in four 19th-century structures set around a walled garden, the hotel’s 10 rooms (including a duplex), from $150, are furnished with antiques and contemporary artworks by Malaysian and Southeast Asian artists from the owner’s private collection.